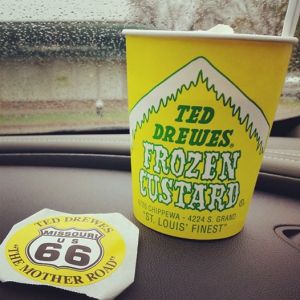 Greetings from St. Louis. I’m told there’s some kind of large arch somewhere, but it’s too rainy and misty to see anything outside. Good thing there’s great beer INSIDE. After a relatively uneventful drive into the “Show Me State” from the “Land of Lincoln.” and yes, I’m dictating this through voice recognition software so I could air quote those things, we arrived for our first appointment of the day at 4 Hands Brewing Company. 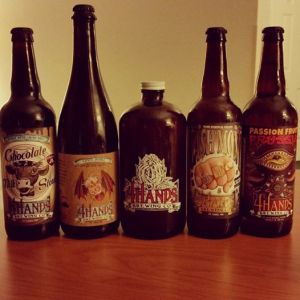 The owner, Kevin Lemp, took me around the brewery. I got to check out their bottling line, and their massive upstairs area which will be used to do a lot of wine barrel-aging for beers. Their tasting room is beyond beautiful, and it’s chock-full of reclaimed wood. One nice little touch are faux cattle skulls on the wall made out of bicycle parts. The beer at 4 hands is excellent. If you’re ever in St. Louis, I highly recommend you check them out.

From 4 Hands, I had a few hours to kill before my next appointment, which means there was plenty of time for a mandatory pit stop at Ted Drewes Frozen Custard, which sits along Historic Route 66, now known as Chippewa Street. They’re famous for their “concretes,” which is frozen custard with flavors mixed in, and they’re so thick that you can turn the cup over and it won’t spill. That little yellow cup of heaven at the top of the page holds a pumpkin pie concrete with chunks of pie crust mixed in. Sheer perfection. 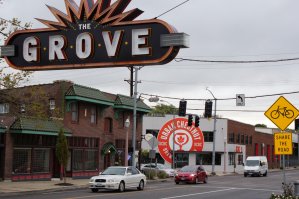 After a quick stop to check in at the hotel, the next stop on the itinerary was a meeting with Co-Founder and Brewmaster of Urban Chestnut Brewing Company, Florian Kuplent. Urban Chestnut has two locations, and our meeting today was at their newest outpost, in a neighborhood called “The Grove,” which is fitting for a brewery called Urban Chestnut. Their new location, which holds their main production facility and  a gigantic German-style beer hall with communal tables, is on Manchester Avenue, which is also a section of Historic Route 66.

After the tour of the facility, and the opportunity to sample some beers, the next stop was a visit to their original location on Washington Avenue. With main production going on at the new location, this spot is now home to a small-batch program, which allows Kuplent and company to research and develop new beers. This spot has a very nice outdoor biergarten, which played host to Barktoberfest tonight, but the weather was kind of nasty. 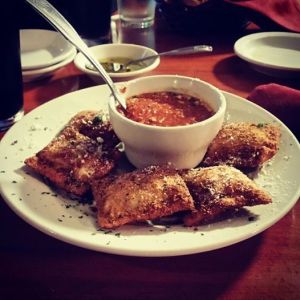 With beer-related business concluded for the day, the final order of business was a trip to St. Louis’ Italian enclave, The Hill, for a true taste of St. Louis: toasted ravioli. Legend says that Mickey Garagiola, brother of Cardinals great Joe Garagiola, was the lucky recipient of a wayward raviolo (yes, ravioli is plural) that found its way into the deep fryer at Oldani’s Restaurant, and the rest is history. Who knows if it’s true, and forget the fact that they’re fried and not toasted, they’re delicious. Today’s venue for toasted ravioli was Anthonino’s Taverna, which gained fame thanks to an appearance on Diners Drive-Ins and Dives.